A HAUNTED MANSION IN SAN DIEGO! 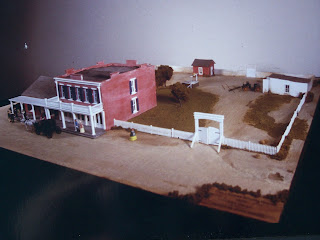 San Diego is home to the oldest brick (fired brick as opposed to adobe) structure in California - the famous Whaley House.  Built in 1856 , This impressive structure is  also said to be haunted! Whether the rumored spirits of the house exist is  debatable, but it sure adds to the romanticism and lore surrounding the property. It's interesting that the first lady of the house -Anna Whaley admitted that she encouraged the local children to believe that her house was indeed haunted. She told them "Hay espantos aqui con ojos grandes" --basically "There are ghosts here with big eyes". This always induced the kids to "skedaddle" off her property and out of her garden!

The structure was saved from demolition in the mid 1950's and was restored and open to the public shortly after. A great deal of research went into the restoration, however due to constant lack of funds and miss-information, the house was restored "1960's" 19th Century  rather than true "1860's" style. Over the years restoration-correction has been occurring --most recently the correct balustrade and porch was returned to the mansion's front. More corrections will be added as time and money permit.

I was commissioned to construct a scale model of the Whaley House as it appeared around the 1865-1869 period --this model was used to show visitors to the house what the grounds and mansion probably really looked like. The model was completed in 1997, and was on display for years. At some point the Save Our Heritage Organization --who has done amazing work with the current restoration - was awarded the overseeing of the landmark. Many of the original displays and artifacts (except original pieces that could be proved were owned by the Whaleys') were removed by the County of San Diego. The whereabouts of the model I made is unknown. These pictures I recently came across while updating my portfolio. The model is 1/8th scale and made from styrene, wood, acetate.  When I find the original slides taken of the model I'll post those as they will show all sides of the structure as well and be a much clearer set of images. 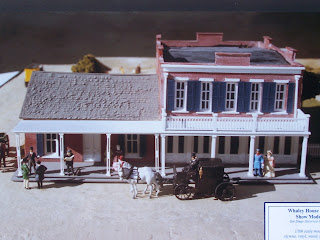 The left annex was used as a grainery at one time, but here in the model it is in use as a courtroom. The black slurry on the mansion side's roof is not my poor brush work, but is to represent the 1860's prototypes hot-tar paper roof! 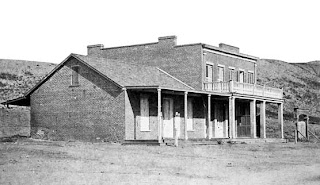 Look at the beautiful lush garden setting of 1860's San Diego!! Anna & Thomas Whaley were from New York,  and Thomas had convinced his wife to come to California where his gold-rush business endeavors were  very successful. Anna was oblivious to what San Diego was like, and she even brought her opera glasses!
The mansion Thomas built for his wife was very East Coast /Late Federal style and was no doubt the finest home in San Diego County at the time. One of Mr. Whaley's business ventures was a brick making machine. Besides bricks for his own home, Thomas sold bricks to the US Government to built a string of lighthouses up the coast --including the Cabrillo Lighthouse also in San Diego.
Building supplies other than adobe were almost non-existent--the closest timber was more than 100 miles away, and there was no timber industry there. One series of model projects underway for the San Diego Historical Society is for an exhibit of "19th Century Prefab".........these were structures built in Maine in sections, loaded onto ships and brought around the horn into San Diego and sold as "instant" housing! This series of models will include a hand full of homes and business that were brought to the west as "kits". About four of the original 15 building brought here in 1850 still stand in San Diego. 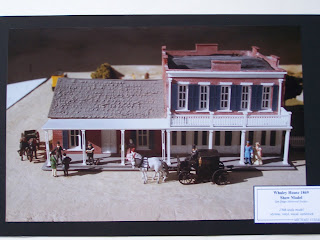 Looks like that horse has taken notice of the photographer as a court session is let out for a break. Those carriages were small kits that had to be built and painted. I had to create a new period-correct stovepipe top hat for the cabs driver. Even the doors to the coach open, but it protected by a display case.
Posted by MIKE COZART at 9:30 PM 7 comments: 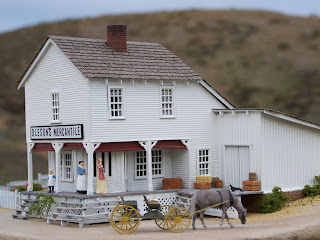 A project I've been working on required me to construct 3 each of several famous set structures from the television show LITTLE HOUSE ON THE PRAIRIE that ran from 1974-1986. None of the structures exist today, and any of the plans and blueprints known to exist for them were destroyed in a massive fire that wiped away everything from scripts, set designs, props, concept art, costumes and anything else associated with the show's production. The first commission was for the OLESON'S MERCANTILE and The SCHOOL HOUSE/CHURCH as depicted in the TV version of WALNUT GROVE Minnesota (.......it was really in Simi Valley less than 1/2 hour from downtown LA!!)  One problem with making models of structures that are movie or TV props, is that they are not real structures in most cases, and their interiors rarely match up with their exteriors. I scanned through hours and hours of episodes of the show and reviewed press photos and cast  set /backstage photos and  also got personal memories from Little House cast and crew for my research before the plans and drawings were started.  Many of the structures over time seem to grow extra walls or details appear on some episodes and on others they are totally absent. With the case of the MERCANTILE,  it's interesting to note the placements of  smoke-jacks and chimneys  on the outside of the building have nothing to do with where fireplaces, cook-stoves and parlor stoves are on the inside sets. Some structures walls actually grew longer......no doubt that the set was revised or enlarged once the producers knew the show was going be around for a while. 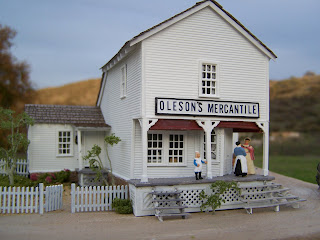 Since my sister is such a fan of the show I built her a Oleson's Mercantile and Schoolhouse for her as well, requiring me to construct 4 of each structure! 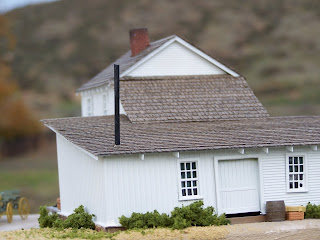 Hours and hours of the show were viewed to find rare glimpses of the buildings backsides to make this as accurate as possible! 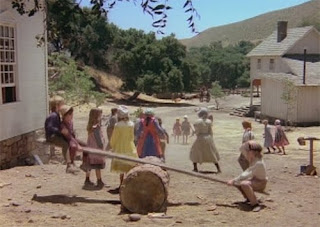 A neat shot from the personal collection of my favorite cast member from the show!

It may be hard to tell from these shots, but all four Mercantiles feature lace curtains, shades and even goods and wares inside the windows!! 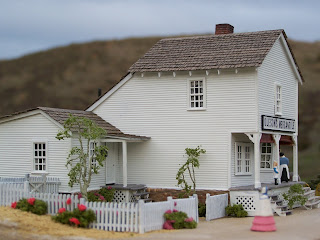 From what I can tell, that large warehouse type door was to get inside camera access and storage. 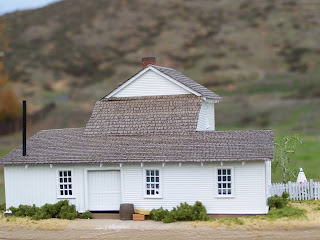 I'll show the fabrication process in a later post. Bellow is the schoolhouse during a mid point of construction, with about 20% more to go before it was completed for delivery 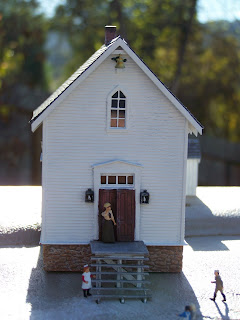 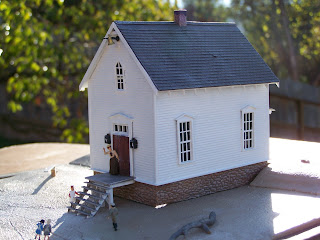 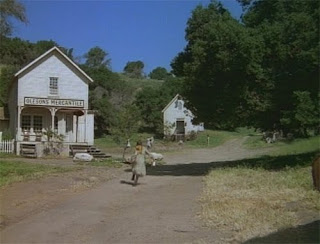 A interesting view from above! 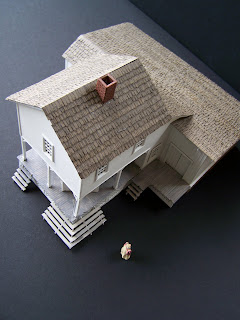 After completion the excited new owner of these placed an order for more! She has requested one with her namesake!! 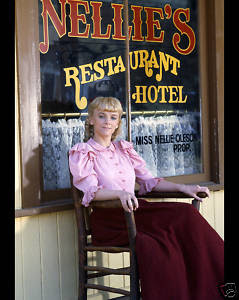