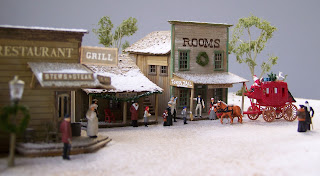 A current project becomes the theme of this years Christmas card!
Every year for my Christmas cards I try and take a project I was working on and re-dress it for use as that year's card subject. This year I was hoping to showcase more prototypes from my MID CENTURY SCALE MODELS 1960's series. The idea was to use the prototypes for Hickman's Department Store kit, the Shopping center stores unit and the Garden Center kits to create a 1961 Shopping Center Christmas! But due to other projects  I just didn't have time. Next year though!
While working on a side project I figured I could used these models of Knott's Berry Farm's GHOST TOWN structures for a quick "GHOST TOWN"﻿ Christmas theme and get the cards to the printer in time. And That I did. After the holidays I'll showcase the Knott's models......some were incomplete to use in the shots ( Gold Trails Hotel, Silver Dollar Saloon) and others were not finished at all ( Drug Store, Print Shop, Express Office, Post Office..etc) Again, I'll do a post later to show all these and explain the project.
﻿ 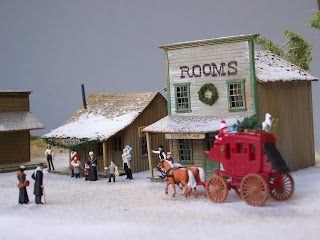 This was a test shot for a different view.......but it reveals the fact that the DRUG STORE &  PRINT OFFICE are missing from the scene! 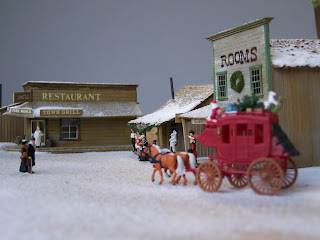 This view hides the missing buildings. Had I used this view I would have placed some Knott's "Eucalyptus" trees in the background and continued the snow further down the street.﻿
﻿ 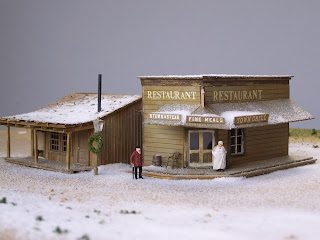 ﻿                  This shot of the incomplete Silver Dollar Saloon and Ghost Town Grill look like a pretty good depiction of a REAL 19Th Century Christmas scene! 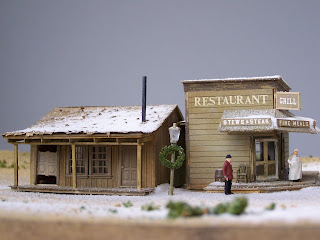 I originally had Santa arriving in a sleigh, but in Old West Ghost Town, Santa uses a Stagecoach!! 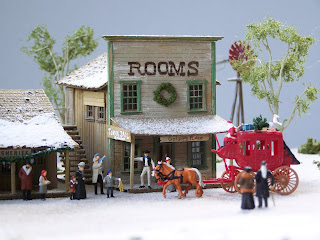 ﻿
Here's some shots of the GHOST TOWN buildings during fabrication......there's 4 of each!!! 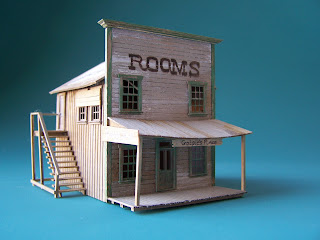 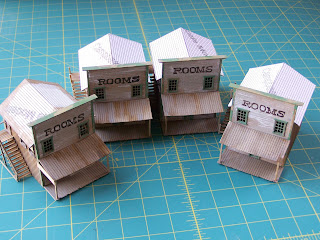 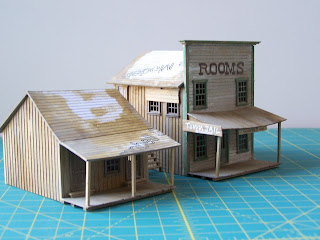 These buildings have yet to be shingled. 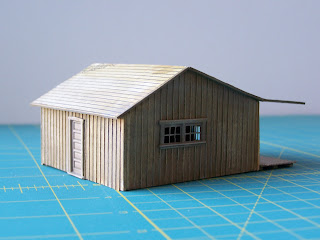 ﻿Backside of the Silver Dollar Saloon 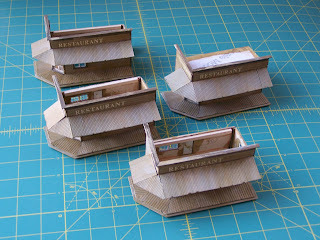 A gaggle of GHOST TOWN GRILLS﻿ 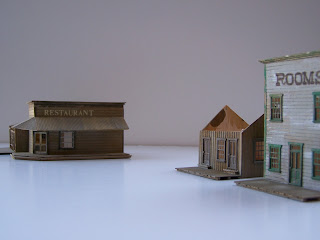 The Knott's GHOST TOWN structures have had many changes thru their history. From additions of porches, extra windows, boarded up windows and various colors and "weathering" appear over the decades, so I tried to replicate the most typical versions and in a later post explain the whole project.﻿ 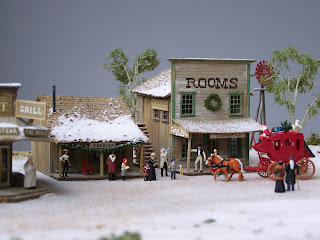 Man, I'm getting hungry for fried chicken and Boysenberry pie!!!! MERRY CHRISTMAS AND HAVE A GREAT BIG BEAUTIFUL NEW YEAR!!!!!!!﻿
Posted by MIKE COZART at 3:37 AM